On Sept. 22, CLM Executive Director Tammy Mello donned a wedding dress and joined Representative Kay Khan and Unchained at Last for a Chain-In event at the State House aimed at building awareness and calling on the Legislature to end all child marriage in Massachusetts this session.

In bridal gowns and veils, with our arms chained and mouths taped. That is how we and our allies protested last week in front of the Massachusetts state house to urge legislators to pass simple, commonsense legislation to end child marriage.

The Chain-In drew the attention of passersby and international news media, including The Guardian, Agence France-Presse, Süddeutsche Zeitung, Boston University News Service and others. See some photos and read more here. 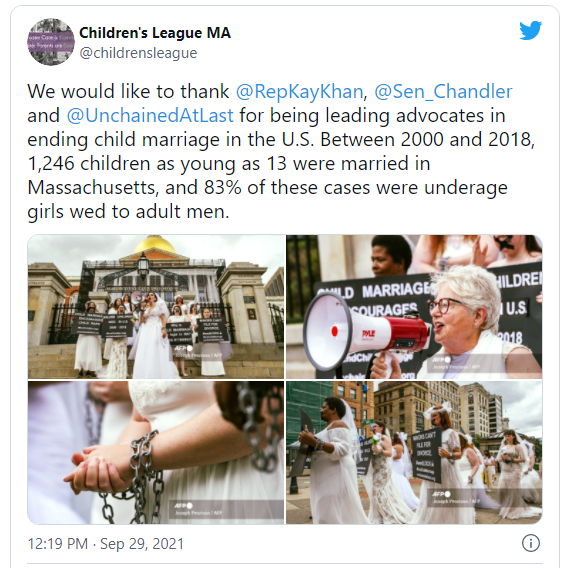 About child marriage in Massachusetts

Child well-being and safety is a complex issue, but H.1709/S.937 provides a simple solution to one of the most insidious and dangerous corners of child abuse: child marriage. The harmful repercussions of child marriage are long-lasting, difficult to reverse, and easily prevented with this law.

While the marriage age in Massachusetts is 18, the law includes a dangerous loophole: Children of any age may marry if they have judicial approval and parental “consent.” When a child is forced to marry, the perpetrators are almost always the parents. Parental “consent” is often parental “coercion.” Judges have wide discretion to approve even marriages with a spousal age difference that constitutes statutory rape, or where a child is marrying a registered sex offender.

Between 2000 and 2018, 1,246 children as young as 13 were married in Massachusetts, and 83% of these cases were underage girls wed to adult men. Further, the current law makes a mockery of statutory rape laws by allowing an abuser to circumvent statutory rape laws through marriage. Fifty-nine of the children wed from 2000-2018 were not yet 16 and therefore unable to consent to sex under Massachusetts law.

Children forced into marriage or forced to stay in a marriage before they turn 18 and become legal adults have few avenues for escape. While under the age of 18, they cannot enter a domestic violence shelter without a parent, or seek help from Department of Children & Families in case of spousal abuse (DCF intervenes only when the abuser is a parent or parent substitute). They cannot independently bring a legal action or retain an attorney easily, as contracts with children, including retainer agreements, are voidable. This means that children can be married but cannot file for their own divorce.

As an organization focused on child welfare, we are alarmed by the detriment that child marriage has on child well-being and long-term outcomes. Research shows that child marriage destroys girls’ health, education and economic opportunities, and increases their risk of experiencing violence. Those who marry before 18 have a 70-80% chance of divorcing—and teen mothers who marry and then divorce are more likely to experience high rates of economic deprivation and instability. Rather than creating stable families, child marriage undermines the safety and well-being of not only the children entering these marriages but their offspring.

Simply put, the U.S. State Department has called marriage before 18 a “human rights abuse.” This bill can easily end this practice in Massachusetts, as many nearby states have done.

Ask your state senators and representatives to support H.1709/S.937 and pass the child marriage ban this session.

Click the "+" button to open the resource category menu.

Friends of the League Newsletter

Get news from the Children's League of Massachusetts in your inbox

Follow us on social media for the latest news and updates!

The Children’s League of Massachusetts is a registered 501 (C)(4).
For press inquiries please email rachel@childrensleague.org.